He worked alone, with no personal staff and not even a secretary to copy his letters and keep his papers tidy. But there was one bundle of letters, in a drawer, to which he could turn for consolation: they had been written to him by Sir Muhammad Iqbal... 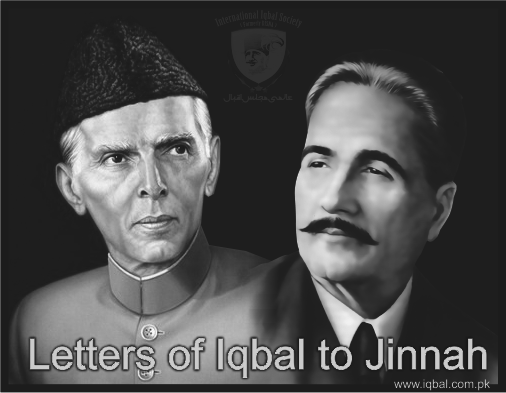 The letters which form the subject of this booklet were written to me by the sage, philosopher and national poet of Islam, the late Dr. Sir Muhammad Iqbal, during the period May 1936 to November1937, a few months before his death. This period synchronises with a very eventful period in the history of Muslim India—between the establishment of the All-India Muslim League Central Parliamentary Board in June 1936 and the great historic sessions at Lucknow in October 1937.

If the Central Parliamentary Board with its Provincial Branches marked the first great attempt on the part of the Muslim League to rally round the Muslim opinion to contest the approaching elections, under the Government of India Act of 1935, for Provincial Legislature on the League ticket, the Lucknow Session indicated the first stage in the reorganization of the Muslim League on a popular basis and as the only authoritative and representative organisation of Muslim India. Both these high objects were attained in great part owing to the invaluable support that I obtained through the sincere efforts and patriotic and selfless activities of many friends like Sir Muhammad Iqbal, amongst others. The League gained from strength to strength in this short period. In each of the Provinces where League Parliamentary Board was established and the League parties were constituted we carried away about 60 to 70 per cent of the seats that were contested by the League candidates. Hundreds of District and Primary Leagues were established in almost every Province from the farthest corner of Madras to the North- West Frontier Province.

The League gave a staggering blow to the so-called Muslim Mass Contact Movement which was started by the Congress to disrupt Muslim ranks and to overawe League into submission. The League emerged triumphant in most of the by-elections and shattered the intrigues and machinations of those who hoped to create the impression that the Muslim League Organisation had no support of the Muslim people.

Within eighteen months before the Lucknow Session, the League had succeeded in organising Muslims as one party with an advanced and progressive programme and had brought under its influence even those provinces which for lack of time or preparation had not been sufficiently benefited by the activities of League Parliamentary Boards. The Lucknow Session furnished an unmistakable evidence of the popularity that League commanded among Muslims of all groups and ranks.

It was a great achievement for Muslim League that its lead came to be acknowledged by both the majority and minority Provinces. Sir Muhammad Iqbal played a very conspicuous part, though at the time not revealed to public, in bringing about this consummation. He had his own doubts about Sikandar-Jinnah Pact being carried out and he was anxious to see it translated into some tangible results without delay so as to dispel popular misapprehension about it, but unfortunately he has not lived to see that the Punjab has all round made a remarkable progress and now it is beyond doubt that the Muslims stand solidly behind the Muslim League Organisation.

With this brief historical background in mind, the letters can be read with great interest. It is, however, much to be regretted that my own replies to Iqbal are not available. During the period under reference I worked alone unassisted by the benefit of a personal staff and so did not retain duplicate copies of the numerous letters that I had to dispose of. I made enquiries from the Trustees of Iqbal's estate at Lahore and was informed that my letters are not traceable. Hence I had no alternative but to publish the letters without my replies as I think these letters are of very great historical importance, particularly those which explain his views in clear and unambiguous terms on the political future of Muslim India.

His views were substantially in consonance with my own and had finally led me to the same conclusions as a result of careful examination and study of the constitutional problems facing India, and found expression in due course in the united will of Muslim India as adumberated in the Lahore resolution of the All-India Muslim League, popularly known as the "Pakistan Resolution,” passed on 23rd March, 1940.